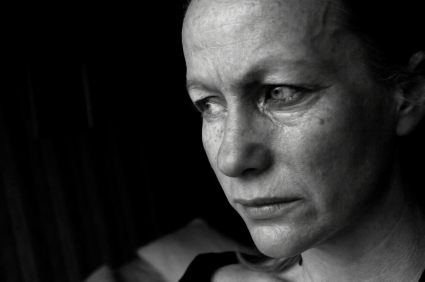 Major depression affects 15 million Americans adults or 5 to 8 percent of the adult population. Major depression differs from the common down moods and temporary sadness common in life.

A person is suffering from major depression, (besides the depressed mood, diminished interest or pleasure in activities) he or she also experiences at least four of the following additional symptoms:

The mood of a depressed person is described as sad (in some cases the sad feelings are denied), hopelessness, discouraged, or irritated (persistent anger, tendency to respond to events with angry outburst or blaming others, or an exaggerated frustration over minor matters). In some cases, the depressed mood can be read on the person’s facial expression or behavior. Some people complain of somatic discomforts such as body aches or pains rather than reporting sad feelings.

The loss of interest or pleasure, symptoms present in almost all depressed people, is described as a loss of interest in hobbies, a loss of enjoyment feelings in activities that were pleasurable in the past. The person withdrawals socially, neglects favorite activities, and even experiences a significant reduction of sexual desire.

Appetite change varies among depressed people. Some experience a reduced appetite, feeling like they have to force themselves to eat, while others experience an increased appetite and may crave specific foods (such as carbohydrates).

Decreased energy is experienced as tiredness and fatigue without substantial physical exertion. Also, the efficiency level and the daily tasks decrease either because the persons feels exhausted fast, or the time needed to accomplish a task takes more than usual.

The sense of worthlessness or guilt may include unrealistic negative evaluation of one’s worth, guilt or rumination over minor past failings. The person can misinterpret neutral events as proves of personal defects and has an exaggerated sense of responsibility over harmful events.

Depressed people may experience thoughts of death, suicide ideation, and even suicide attempts. The death thoughts range from beliefs that others would be better if they were dead, recurrent thoughts of committing suicide to planning how to actually do kill themselves.

Major depression, if diagnosed early, can be treated effectively. Around 80 to 90 percent of those who receive treatment can recover and return to their normal, productive life. The four treatment options available for depression are:

I. Psychotherapy/Counseling: Another effective approach in treating depression is psychotherapy. There are two forms of psychotherapy that have proven to be effective:

A. Cognitive-Behavioral Therapy (CBT): This is a type of therapy based on the Cognitive Model of Emotional Response, and considers that our thoughts and not the external situations, people or events, trigger the behavior and feelings.

The benefit of this perspective is that a person can change the way he or she thinks and further the way he or she feels and acts when the situations, other people or events do not change. A depressed person learns how to replace the negative thinking and unsatisfying behavior associated with depression with proactive and positive thinking, feeling and acting patterns.

Interpersonal therapy focuses in identifying those interpersonal events such as conflicts, interpersonal role transitions, prolong grief, that cause and maintain the depression.

II. Electroconvulsive Therapy (ECT) is a treatment option used only in severe cases of depression when the other two options (medication and psychotherapy) do not work and the patient experiences symptoms such as psychosis (a severe mental disorder in which contact with reality is lost or highly is distorted) or thoughts of suicide.

This treatment approach uses an electric shock to cause a seizure (a short period of irregular brain activity) which releases a lot of brain chemicals (neurotransmitters that help deliver messages from one brain cell to another). This therapy is administered by a psychiatrist in a hospital setting up to three times per week, but usually no more than 12 session are needed. Before the treatment, the patient receives an IV line that allows medication to go straight into the blood. The patient also receives general anesthesia and muscle relaxers.

During the treatment, the patient’s blood pressure and breathing are closely monitored. A 1 to 2 second electric shock is applied to the heart which causes the brain seizure. Medication is also given to prevent the body from moving during the shock. The patient will wake up within 5 to 10 minutes after the treatment.

The most common side effects of the electroconvulsive therapy include:

III. Transcranial Magnetic Stimulation (TMS) is a noninvasive therapy that uses weak electric currents to excite neurons by changing the brain’s magnetic fields. The patient receives the electric current through an electromagnetic coil placed on his or her scalp which creates a magnetic pulse. The magnetic pulse causes small electric currents in the brain which stimulates neurons involved in mood regulation. This treatment is not FDA approved and is used only in clinical trials.

Are you suffering from depression? Do you want to get help? Contact Tulsa Therapist Alina Morrow, LPC-S, today to make an appointment and get the help and relief you deserve. You can reach me by texting or calling 918-403-8873 or by Email.